I’ve been thinking a lot about pregnancy… and birth. Go figure. I think we’ve been programed as a society to fear labor, to fear our bodies during and after pregnancy. We’ve been taught that we must minimize stretch marks and gain as little weight as possible. We must fit back in our pre-pregnant size 6 (or larger, or smaller) pants by 6 weeks or feel guilty about how long it takes to lose baby weight. We are supposed feel bad when we go to the gym a year later and get looks from the 20 somethings that haven’t had the pleasure of being a mom yet.

After going through labor, and a week after Evelyn Oak has come into our world, I am so floored by how incredible the pregnant journey is. It isn’t something to fear. If we get those tiger stripes on our bellies and thighs, they are something to be proud of. A banner of the experience of allowing God to breath life into another human.

That’s all just a long winded intro to Evelyn’s birth story. Keep reading if you’re interested. You will not find advice, medical reasoning, tips or anything very useful except to understand my experience and maybe to comfort you in yours.

WARNING: If you are grossed out by women’s health… get over yourself. Or quit reading. I do give some rather graphic and personal information in the paragraphs ahead.

We had been in Denver the entire week for a class for Nicholas’ new job in China. We joked (kind of joked) that she had to stay in the womb until Thursday when we got back home and then she could pop out whenever she pleased. We went in for our final doctor’s visit on Friday with a different doctor than normal. I told them that my blood pressure would likely be high, as it had every doctor’s visit during my pregnancy. That we might have to take it a second time at the end of the visit and it should be normal. The nurse took it, and took it again saying that it was, indeed high. The doctor came into the appointment and announced that my lower number (diastolic) led them to believe that I had pre-eclampsia or hypertension.

Very quickly, she said that they would have to induce me that day. She did a quick cervical check and found that I was 3 centimeters dilated and 60 percent effaced. Meaning, it was pretty much go time and I had a favorable cervix for induction.  I was put in a wheelchair and pushed over to the birthing center. When we got there I changed… Nicholas took this last picture of me as a pregnant lady. Believe me, I was not feeling as chipper as I looked. I was actually quite scared for both my baby and the induction. I knew that for every intervention that you have during your labor, your chance of a caesarian birth increases substantially.

They began monitoring me, taking blood pressures every 15 minutes and monitoring Evelyn’s heartbeat, the contractions that I was having but not feeling, and my pulse. They kept me under surveillance for around 4.5 hours. About 3 hours in, the nurse and doctor came in and said that my blood pressure was normal and I had no symptoms of pre-eclampsia or hypertension. They wanted to do an ultrasound just to get a peek inside and then we would go from there. After the ultrasound, as we were waiting for the green light to go home and wait for a natural start to Evelyn’s labor, her heartbeat dropped below what was healthy for about a minute and a half. She probably grabbed her umbilical cord with those strong fingers of hers.

That was the point when Dr. M said that we needed to induce. Baby had given us a sign that it was time for her to come out. So we started an IV of Pitocin and started to wait for labor. Funny thing is that I was already having contractions that I was not realizing were contractions. They just felt like tiny twinges of lower back discomfort. The always start Pitocin (at least at Poudre Valley Hospital) very low and only increase it by 1microgram every half hour. I was up to 8 micrograms (about 4 hours) when baby started having a hard time. It was a long time of trying to find the right position, wearing oxygen, thinking about a possible caesarian if she didn’t start to have a steady heart beat.

After staying at 8mg Pitocin for another hour of successful baby heartbeat, the nurse came back and turned up the dose again, and again to 10 mg. At this time I was experiencing contractions and trying to do some of the things we learned in our birth class. I must admit I was so nervous about moving around because I didn’t want baby’s heartbeat to drop again. But when things really got started around 6 hours in, I did’t care as much. I was on the birth ball and using the bathroom and “dancing” with Nicholas.  I decided that I really had to poop about 7 hours in. So I pooped with Nicholas in the bathroom supporting me through 2 intense contractions. Thank God I did that because it relieved a lot of pressure internally.

I came out of that experience saying, its time to get the Nitrous Oxide ready. I didn’t want IV drugs, but wanted to try Nitrous Oxide because it was the lease invasive pain management tool. If that didn’t work I was going to get an epidural. I think on the pain scale, I stayed at a 6/10 most of my labor. The two contractions right before I recieved Nitrous Oxide jumped up. I remember as I leaned into Nick’s shoulder, I said, “That was a nine.” I tried the juice for two more contractions and learned that, while Nitrous might have helped me earlier with my 6/10 pain, it did nothing for my 9/10 pain. I thought I needed to poop again so we went back into the bathroom to wait for the nurse so I could get the epidural.

When she came back I heard Nicholas say to her that I didn’t like the Nitrous and it was time for something else. That’s when I felt it… the urge to push. I thought it was poop until I realized that, there was something much bigger on her way.  From the bathroom I yelled to the nurse that I felt there was a baby coming, right then. She asked, “Are you feeling the urge to poop? Try not to push, try not to push.” Nicholas told me later that the first contraction pushed out my mucus plug and the second made my water break. What a champion my husband was! He told me that he felt a little woozy when that happened but he held himself together.

At this point after a quick check from the nurse (I was still on the toilet) I was told that during a break in contractions, I needed to get to the bed. I declared, “I don’t think there will be a break!” Nicholas and the nurse pretty much picked me up and carried me to the bed, meanwhile my water continued to gush as we walked… told you it was graphic. This was about 7 hours into the induction and about 12 hours at the hospital. I got to the bed, with a lot of help, swung my legs up and curled into a ball to push. I think I pushed for about 30 minutes, it was definitely inside of an hour. It totally feels like the biggest poop of your life that makes you curl into a C shape. Keeping your legs open is extremely difficult at this point. Nicholas was on one side of me supporting my foot every time I pushed. The nurse was on the other, doing progression checks every other time. I must admit that during pushing I was very… in the zone. I kept saying the words to Hillsong’s “You Make Me Brave” kept washing through my mind. The Lord definitely gave me strength to keep going. The lyrics say, ” Because your love, in wave after wave, crashes over me, crashes over me. For you are for us, you are not against us. Champion of Heaven you made a way for all to enter in.” Here is a link for the video.

Nick was the best coach I could have ever asked for. The next paragraph is from his perspective during our daughter’s birth.

**She was making these deep, long, pulling groans.  They were like the daring and calming calls of large ocean waves.  Evelyn was slowly progressing out a little further.  Then she would go back in less; come out a little further; go in less.  I watched this and Jessica’s face at the same time.  I kept telling her that she was coming; she was almost with us.  Evelyn’s hair started to poke out.  I told her one more big one and she would arrive.  I stared with extreme anticipation. Her head popped out and then her little hand.  Her skin was milky blue, like Star Wars milk.  The rest of her body slid out and Jessica took the baby in a Euphoric state.  I was suspended watching this little dance.  I felt separate from it all at first because, well, I couldn’t physically feel any of it.  I was a little sad actually.  I almost felt as if there was nothing I could really do.  But as I watched I realized the music I played, my voice and words, that slowly inspired their movement and comfort.  It was an amazing experience to see something that seemingly appeared out of nothing.  “God is here,” I said.**

After Evelyn came, it was such a blur. Nicholas asked if it was the biggest high of my life as people say birth is. It took me a few days to really think about this question. It was an incredible experience that, unfortunately, I went through without the pain management I had expected. But I am really proud that I gave birth without drugs because I didn’t think that I could do it. When Evelyn was placed on my chest all I knew was that I was so blessed by the Lord. I had been waiting 3 years to become a mom. Ever since our miscarriages, I knew that this was something I deeply desired but that if we were to have children, it would be God’s timing. So here she was: this perfect, wiggly, pink baby who was now completely ours to care for. A gift from God.

And this was how Evelyn Oak Denenberg came into the world. We chose the name Oak, partially because some friends of ours from an earlier time had told us about this name when they gave it to their baby, who sadly passed away. It comes from Isaiah 61, which talks about the people of God being a sign of the Lord’s favor. The will be called “Oaks of righteousness, a planting of the Lord for the display of his splendor”(Isa. 61:3). And that is who Evelyn is to us. That is our wish for her as she grows. We also chose Oak because we used to talk about our pregnancy in code with our SA friends, she was called, “oak tree”.

So thank you, God, for your favor. Thank you for your love. 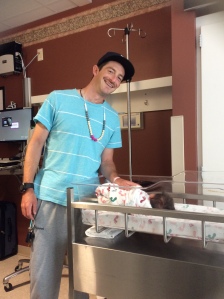