I recently realized that I wrote two blog posts about our entire time in Hanoi. Nicholas was asking me this past week if I had pictures of Vietnam to show his students who are learning about it this month. I have done nothing with my pictures and if I’m not careful, I’ll forget my stories too! So in this post, I will tell a few short stories of what life was like in Hanoi and soon I’ll post a photo blog. For many of you who don’t know us too well, we moved to Hanoi after leaving Shanghai. We took a job teaching English with a company that wasn’t as good as we had hoped. We lived there for about 6-8 weeks (my memory is fuzzy) and came back to America. You can read my post about almost being deported.

When we first arrived, Nicholas and I lived downtown in a studio that I found on AirBnB. Very, very quickly, we realized that we needed transportation. There were no bus schedules, metros or taxis that we felt very confident in taking. Our command of Vietnamese was…. lacking. So we got on Facebook and found someone selling their Honda Win. Nick met the guy for a beer and bought the bike after a quick motorcycle driving lesson.

The first time I was on the Honda, it was one of the scariest experiences of my life. In Vietnam, they don’t stop before going into intersections… you would never cross the street. Instead you just go into the crowd, opposing traffic or group of people and everyone just knows instinctively how to avoid you. Well, our instincts hadn’t quite caught up with us. Nick popped a couple wheelies… purely by accident. After we had our motorbike, we could move about more freely. We were able to explore the city, eat lots of yummy food! Heres a link to watch Nicholas ride with a friend on the Honda in the country.

Soon we had our official apartment. It was about 35-40 minutes outside of the hustle and bustle of Hanoi. I think our rent was around $600US for 2 bedrooms, 2 bathrooms, washer, full kitchen and fully furnished. It was much nicer than our apartment in China and had a real, western spring mattress on the bed! Such a nice surprise.

Outside of how stinking hot it was in Vietnam, it would just pour rain at any moment. Once, we were on our way downtown for a treat at a coffee shop. It just started to come down. I was on the back of the bike and I looked down for 2 seconds. When I looked back up, everyone around us had magically put on a rain poncho without slowing down or stopping! How did they do it?! I can’t possibly imagine how it happened. We made it to the coffee shot and ordered the specialty: Coconut ice cream with espresso poured over it. It really is the perfect treat for a hot day. 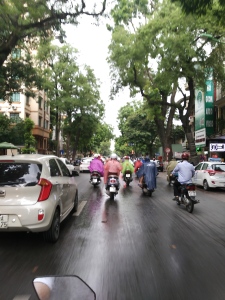 Sometime in that same week, we had a storm roll in. Here is the link for you to watch it. The storm was so powerful, we lost power. We would have went to bed very hungry that night if we didn’t have plans to eat with friends nearby. We walked to their house, she had dinner ready, then we lost power. Nothing better than dinner by candlelight with friends!

During our last week in Hanoi, we would go to the movies by our house quite often. We came out one evening and found that it had been steadily raining for about an hour. We left our rain gear at home (I think it was drying out from the last time we used it!) Well, it would have been just miserable to get soaking wet, with the mall closed we knew we couldn’t buy another poncho. So, we did the thing that only westerners would do… Ask for LARGE trash bags from a coffee shop that was still open. We had lots of stares and fingers pointing at us but we were dry and happy as we rode home on the motorbike.